It is with deep sadness that we announce the death of our Founder and Life President, Sister Ann Teresa, SSJA on Monday 7th March 2022, at Llantarnam Abbey.

Sr. Ann Teresa was a Sister for 57 years, serving mainly in Newport, where she grew up, and Southampton. She spent many years teaching RE at St. Joseph’s High School, Newport. In 1997, she settled into a small convent in Southampton and she asked her local Parish Priest what she could do to help the community. Within days she found herself directed towards work with women engaged in street prostitution in the city. For many years, four or five nights a week, she walked the streets offering comfort and practical assistance to this very vulnerable and marginalised group. Sister Ann Teresa said: “These people had no one to help them, so twice a week we cooked them a big meal. The convent became a second home for some. We celebrated Christmas and birthdays with them, took them to the theatre; anything that gave them a bit of happiness”. After hearing stories of human trafficking and investigating prostitution further, Sister Ann Teresa gathered about 50 people together and launched Medaille Trust in 2006. She set up a safe house for victims of Modern Slavery in Southern England and travelled the country soliciting donations from businesses and church congregations. She eventually got support from Comic Relief, and Medaille Trust established five more safe houses.

Today Medaille Trust is one of the UK’s largest providers of supported accommodation for victims of modern slavery, with nine safe houses. We have provided shelter and support to more than two thousand people fleeing abuse and exploitation. Our Moving On Project works with survivors of modern slavery, helping them access counselling and support, access education and employment, and integrate into the community. We partner with the police to bring the perpetrators of modern slavery to justice.

Medaille Trust CEO Garry Smith today paid tribute to Sister Ann Teresa, saying: “I remember when I first met Sister Ann Teresa at the convent in Southampton, long before I became CEO of Medaille Trust. She was bright-eyed, engaging and interested in my thoughts but what came across most powerfully was her love for the survivors of modern slavery because she had taken the time to get to know them personally, to understand their stories and to walk alongside them on their journeys.

She was a powerful advocate for survivors and her influence in the anti-trafficking sector, both within the Catholic Church and beyond, was incredible. She has left an amazing legacy through her founding of Medaille Trust, which she named after the founder of her order, and we are privileged to take this forward. On behalf of the Trustees and Management and Staff of Medaille Trust I extend condolences to the family and friends of Sister Ann Teresa. May she be granted eternal rest and may perpetual light shine on her”. 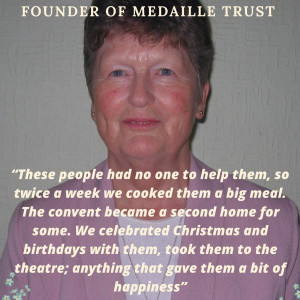 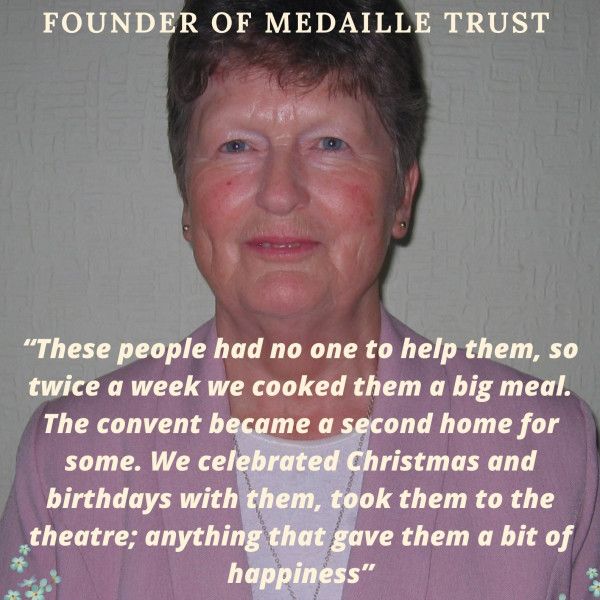 Next entry: Trafficking for sexual exploitation

Previous entry: Medaille Trust among top 50 best companies to work for in the UK